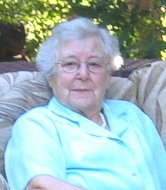 GALVIN, Frances (nee Sparks) - Frances Galvin (nee Sparks) passed away peacefully from cancer on February 8, 2019 in Oakville, surrounded by her loved ones.

Frances was born on July 30, 1928 in Liverpool, England and was predeceased in 1989 by her beloved husband of 38 years, Frank, as well as her two brothers, John and Fred, and her friend, John.

She is survived by her daughters Patricia, Claire, Frances, Joanne and Elizabeth as well as her sister, Pat Fisher and brother, Harold Sparks. She will be missed by her sons-in-law, George and Wally, her 11 grandchildren (Berezowski, Boultbee, Rosenberg, Wadley, Zajiczek and Zanth) and her three great grandchildren.

Frances and Frank emigrated to Milton, Ont. in the early fifties after surviving WW2 bombings in Liverpool that destroyed her family home, and transport to Wales with many other children during the blitz. Frank came to Canada to work for A.V. Roe on the Avro Arrow and Mum soon followed. The family also lived in Winnipeg where Mum never felt warm until their move to Toronto in 1964.

She and Frank settled in North York and Etobicoke, working hard to make a good life for their five daughters. She supported Frank as he established a successful career as an electrical engineer on power systems in mines throughout Canada.

Frances worked as a switchboard operator on the Liverpool Telephone Exchange and decades later with newer technology at North York General Hospital. She retired to Milton, Ont. in 2010. She will be dearly missed.

As per her wishes, Cremation has taken place and a private family service will be held at McKersie-Kocher Funeral Home, Milton.

As expressions of sympathy, memorial donations in memory of Frances to the Salvation Army or the Canadian Cancer Society would be appreciated by the family.