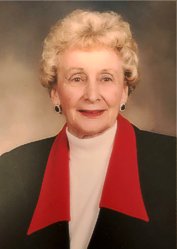 Predeceased by her husband Joseph Walter "Brock" Harris and daughter Donna Eagan. Her family is saddened but grateful that she is at peace.

Margaret was born in North Burlington in 1922. She married Brock Harris in 1943. They spent 50 years together on their farms. Brock was also a founding Director of the Halton Region Conservation Authority serving 20 years as Chairman.

Margaret loved to dance. She was very active in her community and church. When living on the farm she was involved for 50 years in many roles at her church, St George’s Lowville, singing, the auxiliary and administrative affairs.

After Brock passed away in 1994 Margaret moved to the Lakeshore in Burlington where she spent 25 years volunteering, continuing to dance and tending to her garden while she could.

A special thank you to Sheila Stafford who was a companion and care giver to Margaret for seven years, filling the gaps as they appeared.

Visitation will take place on Monday, August 12th from 9-11am. A memorial service will be held at 11am with a reception to follow. All events will take place at St. George’s Church Lowville, 7051 Guelph Line, Milton, Ontario.