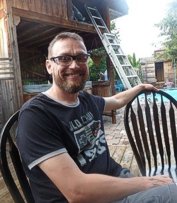 Endeared son-in-law of Lyn (predeceased) and Rodger Fountain (Marilyn), brother-in-law of Deanna (Mike) and loving Uncle to Abbey. Trevor was a loyal employee of Battlefield Equipment Rentals in Burlington.

Trevor Stewart was born on September 23, 1969 in Wallaceburg, Ontario. He and his twin sister April were adopted by Fred and Nancy Stewart when they were 3 years old. Their love and guidance shaped Trevor into the incredible man he became.

In his early adulthood, Trevor was happy to be able to find and connect with his birth family: his father John Chinn (Debby) and sister Sarah Caron (John) and nieces Makayla and Julia as well as his mother Wilhelmina Gatzke, sisters Michelle, Shelley and Lisa and nephews and nieces Jordan, Avery, Valerie, Christopher, Draiden, Tellissa, Madison and Austin.

Trevor married Lesley on January 29th, 2000 and they built a life together based on love of family. Their children Vincent, Neala, Isaac and Ashley meant everything to Trevor and he spent all his free time with them. He included them in the many household projects he took on, including his famous Christmas and Halloween decorations. He shared his love of woodworking and video games with them and always put their needs first. He loved being a Dad to them and gave them a role model they could not only look up to but count on no matter what.

Trevor and Lesley have also fostered many children over the years. Trevor showed each of them love, dignity and care as if they were his own.

Trevor had close relationships with many friends and always found a way to chat and joke with someone new, making friends wherever he went. His sense of humour will be remembered fondly by all who knew him. He was never afraid to look silly if he thought it would make someone smile.

He was truly young at heart and yet underneath it all, he was a man of deep integrity who worked hard every day and did right by everyone he met. He will be missed beyond measure and carried always in the hearts of those who knew and loved him.