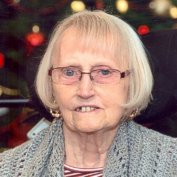 It is with great sadness to announce the passing of Georgina “Gina” Thompson on August 7th, 2019, comforted by family and the incredible staff at Waterford.

Gina had a long fight with Dementia as it slowly took her memories and then her life. Throughout that time she was surrounded by family and friends who loved her dearly.

For those who knew Gina, she was a fighter. On the exterior she would let you know what she thought either through an unexpected comment or the role of the eyes. On the interior though, she was a loving, caring and devoted wife, mother, grandmother, great grandmother, friend and Christian.

Gina is survived by her loving and loyal husband Joseph of 56 years who did not miss a day in the two and half years that Gina was a resident at Waterford. She will also be dearly missed by her two sons, Steven and Wayne; her daughters in-law Jil and Connie; her grandchildren, Amanda, Katrina, Stephanie, Brittney, Sean, Matthew, and Liam; her great grandchildren, Nevaeh and Cole; and her many friends.

Gina is also survived by her remaining siblings, Joe, Lilly and Mamie.