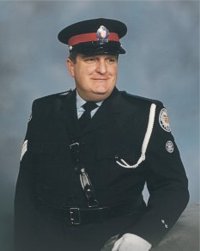 LEACH, John Allen - On Saturday, September 7, 2019, Sgt John Leach, loving husband, father, grandpa, and friend to all, passed away at the age of 72.

A proud man! John was born on August 29, 1947, in Toronto, Canada. He grew up all over the globe including Barbados, Trinidad, England, and Canada.

Married the love of his life Patricia Leach (nee McCusker) on March 21, 1970, in London, England. They made the big Move to Canada in 1974 and lived an amazing life!

Equally adored by all his nieces and nephews, Catherine, Nicole, James, Lee, Kellie, Scott, and Luke, Our Village, THE TPD family and all that knew and loved him.

A private cremation ceremony will be held on Wednesday, September 11th. Visitation will be held at Smith’s Funeral Home, 1167 Guelph Line, Burlington, Ontario on Thursday, September 12th at 12:00 p.m., until the start of the Service of Remembrance, at 1:00 pm. Reception to follow.