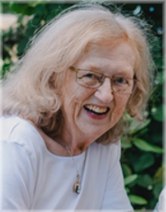 Before coming to Canada Hilda trained to be a nurse at the Royal National Orthopedic Hospital in London and Stanmore, UK.  She made many friends during her years in London, before she decided to embark on a new adventure, travelling to Canada for Expo 67.

Falling in love with Montreal she found work in the nearby Laurentians as a nurse at Camp Lewis where she met her lifetime partner. In Montreal she enjoyed the challenge of emergency medicine at the busy St Mary’s Hospital Centre.

After twin daughters arrived in 1978 the family moved to Calgary where she again became involved in emergency nursing service at the Foothills Hospital. During those Calgary years she volunteered for Habitat for Humanity, UNICEF and with the 1988 XV Winter Olympic Games. Hilda also found time to become a master gardener and accomplished cook and baker.  Upon retirement, Hilda and Jon moved

to a small Ontario town, Port Hope, where Hilda continued her volunteer work with the Capitol Theatre, Friends of Music, Regency Manor, the municipal Accessibility Committee and founded the Commons Park Community Project, dedicated to the improvement of a small green space so that it better served the needs of citizens of all ages. A bench in memory of Hilda Ed will be placed in her beloved park.

All friends, neighbours or people touched by Hilda’s service are invited to a celebrate her life at a party at the family home 10 Little Hope Street, Port Hope on Saturday June 2, 2018 from 3 to 7 p.m.

In lieu of flowers contributions to Habitat for Humanity, UNICEF or a favourite charity would be appreciated.