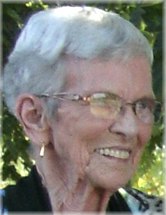 She leaves memories with her extended family, nieces, nephews, and friends.

Shirley enjoyed a long and varied life. She worked in the Canadian Imperial Bank until Wray bought the Esso station in Cayuga where Shirley ran the license office. Following their move to Bolton for Wray to take up a new position with Nissan Canada, she continued work in the local license office and held other part time positions including as the distribution agent for The Bolton Enterprise.

Later, she and Wray enjoyed time away from their new home in Mississauga at their cottage on Lake Chemong in Selwyn. After his passing she lived for several years at the cottage before moving to Peterborough. She spent many years there as a volunteer with Community Care. In 2010, she moved closer to family in Brampton.

Shirley loved the Toronto Blue Jays, knitting and crocheting, reading, crossword puzzles and games, meals out with her family, lilies, daffodils, and pussy willows. She was a member of Emmanuel United Church in Brampton and attended as long as she was physically able. Her final years were spent at Greenway Retirement Community where she enjoyed her small patio and garden.

She has been reunited with her loving husband and son. She lived a good life.

Family and friends will be welcomed on Friday March 8 from 2 to 4pm at the Brampton Funeral Home, Brampton, Ontario. Private interment will follow in Peterbough

Mom was a generous supporter of a number of charities. If desired, donations in her memory to a charity of choice would be appreciated.