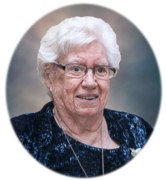 Carol was born in Thessalon, Ontario, October 16, 1936 and later moved to Toronto where she was a longtime employee with Ontario Hydro until she retired and moved to the Barrie area.

Carol was the loving wife of Ernest (predeceased 2010).

She will be greatly missed by her grandchildren, David Brown (Holly), Elizabeth Hill (Kevin), Julie Crawford (Adam) and Emily Wray (Scott) and her great-grandchildren Ava, Ryan, Emma, Reid and Carson.

Predeceased by her parents, William and Edith Gunn, her brother William Gunn and her sister, Barbara Rankin.

The family would like to thank the staff at the RVH in Barrie for their care and support while Carol was a patient there over the past few months.

Visitation will be held at Highland Funeral Home, Scarborough on June 14th from 11:00 AM - 12:00 PM followed by the service in the chapel at 12:00 PM. There will be a reception at the funeral home. Interment at Toronto.