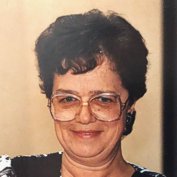 POWERS, Joan Marjorie (Glaeser) (nee McMahon) - Passed away with family by her side on August 9, 2019 at Michael Garron Hospital, Toronto.

Dear sister of Lou (the late Bev), Marie (Willie), the late Teresa (Cameron), the late Fran (Mickey), and the late Gerald. Will be fondly remembered by her many nieces and nephews.

Joan had a love for music, dancing (when her body would cooperate), card and words games and road trips.

Visitation to be held at The Simple Alternative Funeral Centre, 1057 Brock Road, Pickering on Thursday, August 15th from 6 pm – 9 pm and on Friday, August 16th from 10 am until time of Funeral Service in the Chapel at 11 am.

In lieu of flowers donations may be made to The Heart and Stroke Foundation, The Lung Association or The Canadian Cancer Society.