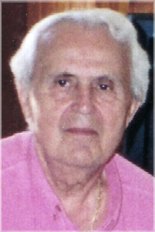 SIDERIS, Anthony (Tony)  - On August 7, 2019, our beloved father, Anthony (Tony) Sideris died 2 weeks shy of his 98th birthday August 26th.  But he almost died a few times before that.

Once when he was a soldier in WWII and sat on a mine while on an Intelligence gathering mission in the Aleutian Islands.

A second time, while fishing and he nearly drowned and a voice told him to go back to his young bride and that he would have two daughters.

A third time when a box car nearly ran him over while working as a Federal Government Grain Inspector.

A fourth time when he collapsed from ulcers that could not be found and he had to be operated on twice in 24 hours.

And a fifth time when he fell backwards in his driveway and suffered a concussion.

But this time, despite standing till the end fighting to live as the true lover of life he was, his big heart could take no more.

You may remember him as a long-standing fixture on Simpson Street in Thunder Bay as the proprietor of the Palace Confectionary and Newstand.

Tony lived most of his life in Thunder Bay (formerly Fort William) from 1935-2002 when he moved to be closer to his daughters in Toronto.

He left Greece at the age of 13 not knowing any English and making the journey from his small Mountain Village of Agia Sotira Kozani. He travelled via mule train to ride in a taxi for the first time and then a train and a ship with his tickets and $20 dollars in his pocket to come to Canada.

It was during this Iliad of his, he saw Mussolini giving a speech. He bought pasta to eat by pointing and rubbing his tummy to indicate he was hungry.

He later met some Greek women who took him under their wing till he arrived in France and then landed in Montreal.

A train then took him to Fort William dropping him off at 4 a.m. where a train station manager took pity on this youngster, figured out the store his father owned and telephoned him to pick up his son.

And that is just the beginning. Tony was predeceased by his wife Vasiliki (Koula) in 2005.

He is survived by his two daughters, Joanna and Irene and his son-in-law Klaas.

He is our true hero and was a good and charitable man with simple tastes and pleasures who loved his daughters and son-in-law with the fierceness of a Greek warrior and with the gentleness of a man with a huge loving soul.

There is a deafening silence that he will no longer be sharing his stories or wisdom.

We hope now he can Rest In Peace. Interment is August 13th.