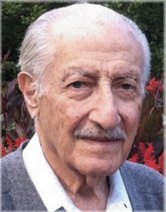 Born on September 5, 1923 of Armenian parentage in Turkey, he was 3 when his family fled the Armenian genocide and scattered around the world.

He ended up in Khartoum, Sudan with his mother and uncle, where he was educated in English by the Canadian Catholic Brothers.

A self-made man, a salesman to the core, fiercely independent, determined, cautious, yet a huge risk taker, he struggled and succeeded in establishing a very successful business in Khartoum.

Visiting North America with his family of five in 1967, he made the tough decision to leave everything he owned behind and immigrate to Canada for the sake of a better future for his children.

At the age of 44, he had to struggle once again through countless years of setbacks, as he tried to find a new business for himself in Toronto. He persevered until he was able to and became even more successful.

Fluent in four languages, well-travelled around the world, he had a passionate love of life, remaining a fighter to the end. Predeceased by his wife of 58 years, Takouhi "Queenie" in 2007.