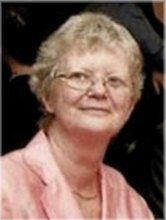 Born to Georgina and Arthur Little, in Kirkland Lake, Ontario, on October 6, 1938.

She will be missed by her brothers Stuart (Ruth) and John Graham (Lesia) and her cousin Stuart Hayward (Ruth).

Her fondness and love will be remembered by her nieces and nephews; Anne Marie (Tim), Nancy (Pat), and Susan (Brad), Pamela (John), Bob (Suzana), Christopher (Karen), Jennifer (Shannon) and all of her grand nieces and nephews. Anna Lou graduated from Havergal College in 1956.

She went on to study history at Queens University and social work at University of Toronto, earning a Masters of Social Work in 1964. Anna Lou dedicated her life to social justice and was a strong advocate in the Voice of Women.

Anna Lou welcomed friends from around the world to her house on Markham Street. Summering in Haileybury, on Lake Temiskaming, her cottage was always a second home. She will be dearly missed by her many wonderful friends, beloved neighbours, and schoolmates.

Donations can be made to Glaucoma Research Society of Canada or Sistering.