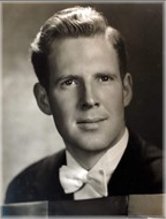 He was predeceased by his beloved wife, Joyce, in 2016.

Predeceased by his parents Elmer and Freda as well as by his brother and sister-in-law Bruce and Verna.

Morley was raised on a farm in Uxbridge, Ontario and educated in a one-room schoolhouse. Following in the footsteps of his uncle, Dr. Roy Malyon, he studied to become a doctor at the University of Toronto Faculty of Medicine, becoming a specialist in Internal Medicine. He practised at the Toronto East General Hospital (now Michael Garron Hospital) where he treated thousands of patients over the course of his career.

In lieu of flowers, donations may be made to Michael Garron Hospital Endoscopy Department (825 Coxwell Avenue,.