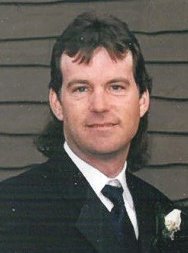 CARMICHAEL, Brian Andrew - (May 31, 1968 – October 7, 2019) - Andrew Carmichael of Brampton passed away peacefully at Brampton Civic Hospital on Monday, October 7, 2019 after a valiant battle with cancer.

He was the loving husband of the late Jane Lindsay (nee Pollock), survived by his cherished daughter Maegan (Jess), beloved son of Glenna and Paul Carmichael and son-in-law to Val and Jim Pollock.

The families are grateful to all his friends and neighbours who watched over Brian and supported him during his difficult Journey. Brian was an enthusiastic fan of NASCAR, Judge Judy, and Corvettes. He was also an accomplished drummer and an overall music lover.

The families extend their heartfelt thanks to the compassionate care workers who attended to Brian in his home and to the many Doctors and Nurses at Princess Margaret and Brampton Civic Hospitals.