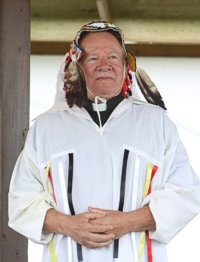 KROKER, Lawrence Jacob 'Larry' S.J. - Larry Kroker of the Society of Jesus died on October 6, 2019 at the Jesuit Infirmary in Pickering, ON.

Born in Jellicoe, Ontario, he was the son of Jacob Kroker and Margaret Doucette. He was 79 years old and a Jesuit for 60 years.

Larry was ordained a priest in 1971. He lived and worked among the Indigenous peoples in Northern Ontario for 47 years. He was Pastor of parishes in Longlac, Aroland, Armstrong, Gull Bay, of St. Anne’s in Thunder Bay, as well as parishes on Manitoulin Island and the North Shore of Lake Huron.

He was also Pastor of Thunder Bay’s Kitchitwa Kateri Parish, a founder of Anemki-Wadj retreat centre, and director of a diaconate and lay-leader formation program.

The Fort William First Nation made Larry an Honorary Chief and gave him an indigenous name, Aski Shabwaweshkang – He Goes Everywhere. Catholic Missions in Canada recognized him as the Canadian Missionary of 2018.

On Thursday, October 10th, friends may visit from 7-9pm at Manresa Jesuit Spiritual Renewal Centre, 2325 Liverpool Road, Pickering, ON L1X 1V4 where a wake service will be held at 8:00pm.  On Friday, October 11 at 10:30am a Funeral Mass will be celebrated in the same Manresa chapel.

On Wednesday, October 16th, Mass of Christian Burial will be celebrated at 11am at St. Patrick’s Cathedral followed by burial at Immaculate Conception Cemetery, Fort William First Nation, and Feast at the Community Centre.