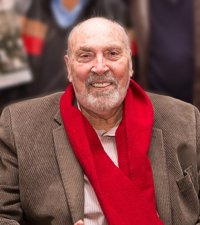 GAVIN, Father Joseph B., S.J. - Joseph Gavin of the Society of Jesus died on October 6, 2019 at the Jesuit Infirmary in Pickering, ON.

Born in Lansdowne, Ontario, he was the son of Charles Gavin and Leona Leeder. He was 84 years old and a Jesuit for 65 years. He was ordained a priest in 1968.

Taught by the Jesuits at Regiopolis High School in Kingston, he later taught at St. Paul’s Jesuit High School in Winnipeg. After graduate studies in England and at Columbia University in New York, he received a Doctorate in History from McGill Universit.

He was Professor of History at the Gregorian University (Rome), at Regis College (Toronto), and at Campion College (Regina) where he became Academic President. At Concordia University in Montreal he was Founding Director of the Peace Institute.

Fr. Gavin liked doing pastoral ministry and became the administrator of Holy Cross Parish in Rosemere, QC. For many years he served as the Superior of the Jesuits in Montreal and in Ottawa.

In 2015 after an above the ankle amputation, with great determination he learned to walk and drive again, only to succumb to cancer in 2019.

Articulate, witty and affectionate, Fr. Gavin is much loved by his family, his students and the Jesuits.

On Saturday, October 12 at 9:30am a Mass of Christian Burial will be celebrated at the same chapel.  Interment follows at the Jesuit Cemetery, Guelph, Ontario at 2:00pm.

In lieu of flowers, donations to the Jesuit Advancement Office, 43 Queen’s Park Cres. E., Toronto, ON M5S 2C3, (416-481-9154) would be appreciated as your expression of sympathy. Arrangements entrusted with Rosar-Morrison funeral home, Toronto.