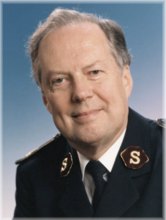 Together with his wife, Mrs. General Maude Tillsley, World President of Women's Organizations, Bramwell travelled the world, nurturing Salvationists in their faith and highlighting the work of The Salvation Army.

Bramwell was born in Kitchener, Ontario, on August 18, 1931, to Salvationists Harold and Doris Tillsley, who had emigrated from England to Canada just a few years before.

He accepted Christ at a young age and became actively involved at Kitchener Citadel, including as a junior soldier, corps cadet, bandsman and cornet soloist.

General Tillsley was predeceased by his wife, Mrs. General Maude Tillsley, who was promoted to glory in 2014.

Loving prayers are extended to the General's sister, Lt. Colonel Audrey Wilder (Lt. Colonel John) of Oshawa, Ontario and to his children and their families: The Reverend Dr. Barbara Robinson (Major Malcolm) of Brockville, Ontario; Commissioner Mark Tillsley (Commissioner Sharon) of London, UK; and John Tillsley (Margaret) of Queensville, ON. Friends will be received at Northridge Community Church, 15338 Leslie Street, Aurora, on Friday, November 8th from 7-9 p.m. and on Saturday, November 9th from 12-1:30 p.m.

A Service of Remembrance and Thanksgiving will be held at Northridge Community Church on Saturday, November 9th at 2 p.m.