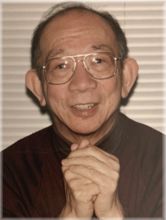 YUNG, Ching Shing (Bill)   -  Passed away peacefully in his 90th plus year.

He will be greatly missed by his family and friends.

At the age of 19, he left his birth city Shanghai to join the Chinese Expeditional Force in Burma.

He served as an interpreter with the American Adviseral Group attached to the Chinese force.

From the base in Ledo, Burma, he trekked all the way down to Hsipaw with his division unit – a distance that took over 2 months to cover.

It was jungle all the way with poisonous snakes, malaria mosquitoes, and night ambushes by Japanese friendly natives. After the war, he went to England to join his father. He completed his education there and worked as a transformer design engineer after serving a full year apprenticeship course with the famous engineering company English Electric Co. at Stafford.

In 1971 he went to join AEG in Germany and became Transformer Adviser to the company oversea transformer manufacturing units.

He served in the oversea units in India and Argentina for a number of years before returning to England. In 1977, he immigrated to Canada, where he became transformer design manager for Federal Pioneer, Moloney Electric, and Ferranti Packard.