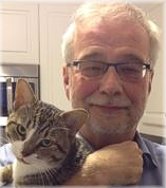 Allan had a long and successful career as a writer and journalist, notably as speech writer for the Premier of Ontario.

It was a matter of professional pride for him to write his own obituary:

Allan felt he got a chance to lead a better life than most people have the opportunity to.

He loved writing speeches and oped articles, helping people to explain their ideas to each other.

Being part of the debate was important to him, and he'd fight to get his ideas on the table. Sometimes, the ways he did it no doubt contributed to his heart problems. (Such as when he'd work through the night on a speech.)

In recent years, Allan didn't have the best of luck. As well as his disease, Trump's election was a devastating blow, his mother Pearl passed several years ago. And while it seems trite to mention, he was hit hard by the death of his tabby, Stewie. For a couple of weeks, every morning Allan woke and he'd look over to Stewie's side of the bed, hoping that was a bad dream.

CHF was by far the toughest blow. It was accentuated when he collapsed on a bathroom floor, and required CPR. Allan would joke that gave him a card to play: He had died, and didn't see St. Peter, no angels, or 72 virgins - or any other sign of any after life. Top that!

Allan leaves behind his two sisters, Rebecca and Mikki, and 4 nieces (Sharon, Kelly, Britt, and Nicole). He thought of Sharon as a protege.

Funeral services will be held at Benjamin's Park Memorial Chapel, Toronto on Monday, January 13, 2020 at 2:00 p.m. Following the burial, shiva will held at the home of Jan and Lorne Mitchell at 35 Minho Blvd. in Toronto.

Allan's family and friends thank the staff at Toronto Grace Health Centre who cared for Allan in his last weeks.