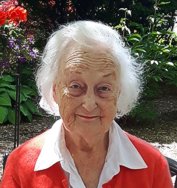 The death is announced of Olga McLaughlin at the Trafalgar Memorial Hospital, in Oakville, peacefully with her son and daughter present, on February 11th, 2020.

Adored mother of Veronica and Michael, stepmother to Madeleine, Tory, Alix, Terry, and Frank McLaughlin, she will be much missed. A fond grandmother and great grandmother, Olga was the widow of Paul McLaughlin and earlier of Colonel Malcolm Younger.

Born in 1924, her parents were Colonel Victor Bonavia RAMC and Sonia (nee Von Fraenkel) from Malta and the Ukraine. She was predeceased by her younger sister Mary McLaughlin.

Her interesting life took her from India where she decoded secret messages from the Chindits in the far east, to Shanghai and Hong Kong, Egypt to Germany, and finally to London.

Tragedy struck twice with the loss of two baby boys at birth, and a severe collapse in her health from which she eventually recovered. Her husband Malcolm died in a car accident, aged just 50 whilst on active service for the War Office. Some years later she married Paul McLaughlin and came to live in Canada, leaving behind a career in the House of Lords where she was secretary to the Lord Chancellor.

A Funeral Mass will be held at Our Lady of Perpetual Help, 78 Clifton Road, Toronto, on Saturday, February 15th at 1:30 p.m. Interment to follow at Mount Hope Cemetery.