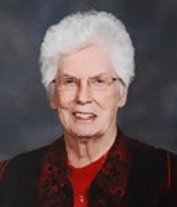 She was dearly loved and meant the world to her children Marilyn (Domenic), Douglas (Leslie) and Margot (Bob) and her grandchildren Michael (Gene), Matthew, Adam, Mitchell, Jarek and Kylie.

She was known as "GG" to her great-grandchildren Isla and Lochlin. She was a loved daughter, sister, cousin, aunt and friend to Eleanor (Harry), Kelly (Michele) and family, Connie and Rachel, Elsa (Jim) and family.

Her love extended beyond her immediate family to include her many step-grandchildren.

Muriel was born in Magnetawan, Ontario, to Robert (Ang) Bell and Mary Bell on February 27, 1926. One of her favourite childhood memories was going to a one-room schoolhouse 2-½ miles from home. She then went to Burks Falls High School and continued her education in London at a technical school learning to type and take shorthand.

Moving to Toronto, she attended Shaw's Business School and was then hired by Stromberg Carlson where she met her future husband Jack Leonard Peck. She was married on a snowy day November 5, 1949 in Spence, close to her home.

After living in Etobicoke for over 50 years, she spent her final years first at Arbour Trails in Guelph and then Amica in Georgetown, Ontario.

In lieu of flowers, please consider a donation to the Canadian Cancer Society

to honour Muriel's 35 years of canvassing or The Salvation Army.

Interment will take place in Magnetawan later in the spring.  Arrangements with Jones funeral home.