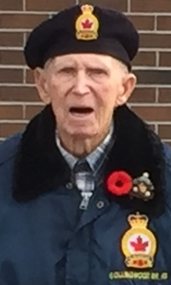 WHITEHEAD, Frederick Henry   -   WWII Veteran Passed away peacefully at home with family by his side on Monday, February 17, 2020, in his 96th year.

Fred, beloved husband of the late Joan (2014), father of the late Sharyn-Anne (2007) and her husband Brian LePage and loving grandfather of Nicole (Derek) LePage-Mero.

He will be remembered by his sister Elinor (the late Norman) Burgess, sister-in-law Margaret (the late Earl) Wood, nephews David (Jan) Burgess and John Burgess, great-nephew and niece James and Katie Burgess, nieces Shirley and Nancy and great-niece Cree.

Fred will be deeply missed by his dear friend Cathy Wilson.

Fred was highly involved in the communities in which he lived serving as President of the Bert Robinson Minor Hockey League, the York Lions Club and he was an active member of the Royal Canadian Legion Branch 63 and a member of Probus.

He was the Lectronic Kaddy distributor for Georgian Bay and was a keen entrepreneur.

or the Living Wish Foundation would be appreciated.