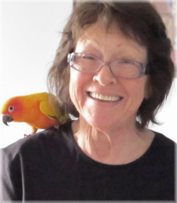 Shirley was in her 75th year and had been living with Type One Diabetes for seventy years when she left her older brother Paul, scores of friends and Shirley, her pet parrot, a Sunrise Conure.

She was a Rotarian, involved with the Canadian Centre for Refugee and Immigrant Healthcare, a supporter of and participant in Variety Village, volunteered at the CNIB, was a Probation Volunteer for the Ministry of Correctional Services and advocated for and generously supported her community.

She taught in Gimly, Manitoba, before obtaining her Master of Education at the University of Toronto after which she was a Special Education Teacher and Librarian at St. Joseph School in Markham before retiring in 2000.

Although she died less than six kilometres from where she was born, Shirley travelled the world and established important relationships wherever she went. She enjoyed driving her unique, custom-built, open-air, somewhat noisy, roadster before having to move to the far more civilized 2015 Miata because oxygen therapy was required.

A teacher, mentor, friend and good neighbour, she was courageous, a rebel and to many, a hero.

She will be missed. As we look forward to a future without Shirley, we are grateful to those health care professionals who helped her fight her medical battles at the Diabetes Clinic at University Health Network Toronto General Hospital, The Eye Clinic at Sunnybrook Health Sciences Centre, North York General Hospital in her last battle and finally to those who eased her transition into and through the final stages of her life at Bridgepoint Active Healthcare.

For those who would like to make a donation in her memory, any of the above would appreciate your support.