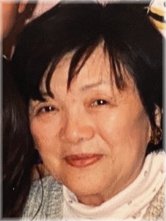 Born in small town Alberta, she spent a portion of her childhood in Vancouver. With the passing of her mother, she and her sister were sent to live in her father’s village in China.

In her early twenties, she moved back to Canada where she met and married her loving husband Reginald. They returned to Beijing where their lives were suppressed under Communism. After much hardship, they managed to return to Canada, now with a young family, to start a new and wonderful life.

Her happiest times were with family and close friends. We will cherish her memory as our lives continue to be influenced by her.

She was predeceased by her husband Reginald, her brother Lem Pon, and sister Lil Wong.

Special thanks to the staff of Mackenzie Health Richmond Hill who were very kind and caring.

Friends and family may call at Marshall Funeral Home, Richmond Hill, on Saturday, March 7th from 11 a.m. until service time in the chapel at 12:30 p.m. Interment at Richmond Hill.

In lieu of flowers, donations can be made to Mackenzie Health in memory of Gay Primrose Lee.