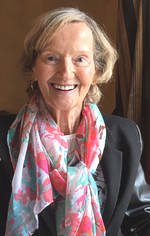 Surrounded by family, the affection for her was as strong as her love for all things she was passionate about including her children, grandchildren, family, friendships, animals and most of all her late husband Peter.

Born on April 21st, 1935 in Edinburgh, Scotland she was the third of five children, James, Sheila, Elizabeth and Ken to William and Anne Burns. She revelled and was proud to say she shared the same birthday as the Queen and told everyone of this each year.

Norma grew up during the war and had many stories from her time back home, including how the planes would fly overhead dropping the bombs as her father would be summoned off to protect the brewery where he worked. Later it was dancing at the Palais with the likes of Sean Connery and swimming at the Portobello Pool.

Norma worked at Duncan Chocolates where she worked the line like Lucille Ball eating every second one and it was there, she met the love of her life Peter. They would get engaged and married in 1956, having two children Yvonne and Russell. Taking a leap of faith, they all would emigrate to Canada in October 1961 to start an exciting new life.

Canada brought them success with Peter’s quickly rising career in the Packaging Industry, more friendships and a third child Peter. Norma enjoyed everything this new life brought with traveling the world, forging new friendships and supporting Peter in his career.

When young Peter was old enough Norma decided to return to work. Her love of jewellery made her a natural in Sales, first at Universal Jewelers then on to a career with the Ostranders Group rising to management in their flagship store Grahams at Sherway Gardens. It was during these years she became her own best customer always returning home with a new purchase. However, when needed, she returned to Peter’s side at SGS Machinery and ran a department with computer-like precision long before they were introduced.

Norma had a love of fast cars and would tell how she only got caught once for speeding even though she was the fastest of all of us. She loved telling us about her sportscars especially her Trans-Ams and going for rides in the one’s young Peter brought home. Her love of speed was furthered by attending races with Peter Sr. and collecting many die-cast models of her dream cars.

As time went by and grandchildren were born Norma took to the role of Grandmother seriously, doting after all of them as they came Simon, Sean, Andrew, Bradley and Nicole. They were the light of her life, walking into her home you would see more and more pictures of them as they grew. As Norma had a special place for them, she also had a very special place for her children and their spouses and their families; Yvonne & Larry, Russell & Linda, and Peter & Gina. She enjoyed ever so much visiting and spending time at family gatherings telling the stories of the past and dreams of the future.

With the passing of Peter five years ago, Norma remained fiercely independent enjoying her home in Bronte regardless of what challenge she faced she steadfastly moved forward with her Scottish grit and determination. Her presence at the Colbourne Centre for her weekly dancing was fact of this.

Norma loved her life and all those around her, she brightened every room she walked into, was the life of the party and was always the protector. She will be deeply missed by all that met her and most of all by her family, Yvonne and Larry Whyte, Russell and Linda Smith, Peter and Gina Smith, and her grandchildren Simon, Sean, Andrew, Bradley and Nicole.