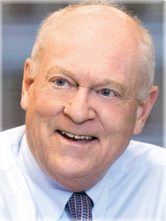 O'NEILL, Thomas Charles - 1945 - 2020 - It is with profound sadness that we announce the passing of Tom O’Neill on Friday, April 3, 2020. Tom passed away at the Ross Memorial Hospital in Lindsay, Ontario, following a sudden stroke at the cottage.

Tom was husband to Susan (Noël) for 52 years; Dad to Carrie (George), Robin (Chris), and Sandra (Andrew); Papa to Aidan, Alexa, Dylan, Liam, Jake, Ryan and Tyler; brother to David and Grant. Tom will also be greatly missed by his Aunt Teddy, his many cousins, nieces and nephews on both sides of the family.

Tom was born on March 20, 1945, in Montreal, Quebec, to Charles and Patricia O'Neill. He grew up in Quebec City, where he attended Quebec High School. Tom maintained his friendship with several of his dear friends from his early days in Quebec throughout his life.

Tom continued on to Queen's University, where he graduated with a Bachelor of Commerce degree in 1967, and first met Susan.

Tom and Susan moved to Toronto in 1967, where Tom joined the audit staff at Price Waterhouse, and became a partner in 1978. Until his departure in 2002, he held various leadership positions in both the Canadian firm and in the global firm, including the position of CEO and Chairman of PwC Consulting in Toronto, and the Chief Operating Officer of PwC Global in New York. Tom cherished the many life-long friends he made at PwC and the colleagues and clients he worked with over the years.

Tom passionately turned his attention to extensive board involvement, where he excelled in corporate governance. His boards included Dofasco, Ontario Teachers’ Pension Plan, Nexen Inc., The Adecco Group; thirteen years with Bell Canada, serving as Chairman for seven; Loblaw Companies Limited for sixteen years, serving as Lead Director for six; eleven years at Scotiabank, serving as Chairman for five; was serving on the Wittington Board. He was also a member of the IMF's External Audit Committee for two years, and continued to consult with them for several years afterwards.

Tom’s contributions extended to the community. Tom sat on the Stratford Festival Board in the ‘80s. He enjoyed spending time at the Toronto Club, where he was serving as President. Tom was passionate about Queen's University, and served in a variety of capacities, including Vice-Chair of the Board of Trustees, Chair of the Advancement Committee, Chair of the Campaign for Queen’s, Chair of the Campaign for the Queen’s Centre, and Chair of the Queen’s Centre Cabinet.  He then became a member of the Advisory Board of the Smith School of Business. Tom also received an Honorary LLD from Queen's in 2005. Tom was also very dedicated to St. Michael's Hospital, serving on the Board for fourteen years, as Chair for four. He was one of the leading architects of the newly formed Unity Health Toronto organization.

Tom received the ICAO Award of Outstanding Merit from CPA Ontario to recognize his contributions to both the profession and the community. He also received the Peter Dey Governance Achievement Award in recognition of his outstanding and ongoing achievements in the area of corporate governance. Tom was recognized at two events last year for his exceptional sponsorship of women in Canada: Catalyst Canada Honours, and a dinner that was hosted at The Toronto Club by thirty-six of Canada’s senior female executives and board members.

Tom's absolutely favourite place to be was at his cottage on Indian Point, Balsam Lake, with family and friends, where he could putter around tirelessly with his red, squeaky wheelbarrow, burn a seemingly endless supply of firewood, and enjoy the sunsets and cocktails at the end of the day.

Tom was passionate about hockey. He was a life-long fan of the Toronto Maple Leafs, although they were detrimental to his health. Anyone who attended or watched a game with him can attest to this, as it was quite common for him to have lost his voice by the second period.

Principled, warm, and generous, Tom had a wonderful sense of humour. Tom was blessed with many gifts, which he built on and expanded well, and shared willingly with others.

A Celebration of Life for Tom will be held in the fall, when we are hopeful that the world will be safely on the other side of this pandemic.