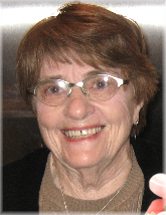 LAMBIE, Margaret Jeanette - Toronto, Ontario - It is with tremendous sadness that we announce the passing of Margaret Jeanette Lambie (née King), or Jeanie, to those who knew and loved her. Jeanie passed peacefully at home on Sunday, April 5, 2020, just a few weeks after celebrating her 89th birthday.

She was born on March 18, 1931 in Toronto. She was the eldest daughter of the late Francis (Frank) Glenny King and Ella King (née Parsons) of Cayuga, Ontario.

Jeanie was predeceased by her beloved husband, Russell John Lambie of Toronto.

Jeanie will be deeply missed by her brothers, Edmund King (Ann) and Douglas King (Pat) and her sister, Marjorie Paradine (Jim); her children, Susan Lambie (Roger Dent), Jennifer Smyth (Pat) and Jim Lambie (Janet MacLeod); and her grandchildren, Eddie Lambie-Verchomin, Meredith Dent, Sara Smyth and Evelyn Dent; as well as the furry loved ones which include Snowball, Pookie, Sparky, MacDuff, Max and Jed.

Jeanie and Russell met at the Easter Seals Blue Mountain Camp in Collingwood, Ontario. Apparently they liked each other quite a bit, as they ended up spending their lives happily together as husband and wife for forty years.

Jeanie was a nearly lifelong resident of the Beach neighbourhood in Toronto’s east end, where she was a student at Williamson Road Public School and Malvern Collegiate. She attended Kew Beach United Church, where she and Russell were married in 1958.

Along with years as a bookkeeper and her volunteer positions with the Church, Jeanie was also a proud lifetime member of the Glen Stewart Chapter of the I.O.D.E. where she did amazing charitable work and made lifelong friends.

Jeanie was truly one of the most uplifting people you could have ever hoped to meet. After contracting polio at a young age, she spent long periods in hospital where her incredibly positive attitude not only kept her going, but enriched the lives of others. Despite her challenges, Jeannie was an inspiration to those around her, and she lived a life full of activities, including winters in Lakeland, Florida, and summers in Muskoka and Haliburton. Always up for an adventure, she joined family for road trips across North America and enjoyed many beautiful sunsets on PEI. Jeanie loved life and was equally happy with a good book or a crowd of people. Her warmth, kindness, generosity and laughter will be so greatly missed by her family and the many friends she made throughout the years.

The family wishes to thank the wonderful staff and caregivers at Belmont House, Jeanie’s happy home for the past eight years.

To remember Jeanette, donations can be made to The National Chapter of the I.O.D.E. or Belmont House.

A service and memorial of her life will be held at a later date.