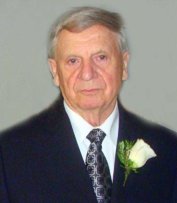 WEIDNER, Albert - Albert’s journey began on August 8, 1930 in Volynia in the former Ukraine. Along with his oldest Brother, Emil, he immigrated to Canada in early 1951.

At that time, he left behind his parents, 2 Sisters and 4 other Brothers. 3 of his Brothers, Ernst, Wili, and Erwin later joined him in Canada.

His Brother Emil wanted his fiancée Hilde Roesler to join him in Canada to begin their married life together. However, Hilde’s Father, Paul, saidshe could go but only if she was accompanied by her younger Sister, Aurelie. Through the grace of God, the 2 Sisters soon ended up marrying the 2 Brothers.

And so, Albert and Aurelie were married in Grand Bend, Ontario on April 3, 1954, over 66 years ago. The two of them were then blessed with 3 children, Ursala, Eleonore and finally a Son, Robert. Ursala married Alfred Schultz and had 4 children. Eleonore married Walter Petrac and had a Son, while Robert married Andrea Agh and had twin boys. There eventually were 7 grandchildren and 10 great grandchildren.

Albert and his Brother Ernst, eventually began a successful window manufacturing business, Weatheright Aluminum, in the ‘60’s. Throughout the years, Albert would quietly help many people with advice and often with loans to those in need. His belief in God always guided his way.

Albert and Aurelie’s lives revolved around their faith in God’s word through the community of the German Church of God, and supporting their ever growing family. They always cherished the fellowship of family and friends and provided an example of what love, caring and faith actually meant.

In the early ‘80’s, while driving around searching in their red Volkswagen they bought a cottage on Lake Simcoe. It quickly became a place with cherished memories of fishing, large family gatherings and bountiful meals for all those that came.

Although his recent health prevented him from attending the church they both loved, he cherished the peace, guidance and fellowship it always gave them.

Albert’s journey here on earth ended on Monday, May 25, 2020. He passed away as we would all want to, at home, next to loving wife, in peace and in no pain.

God rewarded him in the end for all he had done for others over his lifetime. He could not have left his beloved Aurelie in a kinder or gentler way until they would meet again.

We will miss the quiet love he showed all of us, the twinkle in his eye while he would be telling a joke, and the example he set as to what a loving and kind gentleMAN, truly is.