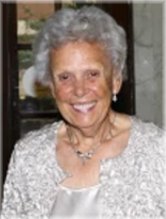 ANGLIN, Margaret Catherine (Fleming) - Died peacefully at her retirement home on May 25, 2020 in her 92nd year.

She was born in Port Arthur, Ontario (now Thunder Bay) and is survived by her husband of 65 years, Bob, with whom she raised four children: Paul (Yanmin), Gordon (Ricki), Maureen (Dominic), and Carolyn (Eric).

She is also missed by her two grandchildren, Silke and Jerome, and many nieces and nephews.

She was predeceased by her parents, Viola and Murray, her brother John and niece Susan.

Margaret was a compassionate, strong, intelligent woman, who took on whatever life threw at her with ever-present calmness and positivity. From the time she was a teenager, she led groups of people to make the world a better place. This included high school students struggling with math, refugees finding a new home in Canada, and seniors wanting to expand their minds.

Margaret was a trailblazer in many different ways. She was top of her class in Math in high school, heading west to complete her Bachelor’s degree at the University of Manitoba where she led her sorority. She went on to do her Master’s in Statistics at the University of Toronto where she was the only female in the class. Over and over, Margaret was the first female to hold a role, just because it seemed natural to her to do so. She was one of the first women to work at the Defence Research Board (where she worked with the first mainframe computer in Canada), the first female Chair of the Deer Park United Church Council, and the first lay female serving communion.

She loved to travel, visiting 70 countries with her husband, Bob, including an around-the-world trip. Her favourite place in the world was the camp on Island Lake just north of Thunder Bay. Built by her father in 1932, she spent all but 4 birthdays there. She celebrated her 90th birthday there with her husband, children, grandchildren and nephew Peter. As the loons called out, we read through the family time capsule created 20 years before. At 89, she was still the one to drive the waterskiing boat, joyfully going in circles and bouncing over the waves.

As mother and grandmother, Margaret devoted herself with care and love. As a volunteer, she made great contributions to her community. Her passing is a huge loss to family and friends.

The family celebration of Margaret’s life will be held on Monday, June 1, 2020 at 1:30 pm. To participate in the celebration online or by phone, please contact Morley Bedford Funeral Services.

In lieu of flowers, donations in Margaret’s memory may be made to a charity of your choice.