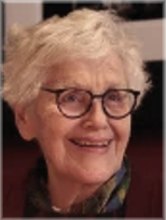 Isabel was born in Kingston Ontario in 1934. Her family moved to Toronto in 1948. She graduated from Havergal College in 1952 and in September 1955, she graduated from Toronto General Hospital School of Nursing.

Isabel married the Late Reverend Doctor Boyd Sinyard, who was a graduate student at the General Theological Seminary in New York City. Isabel worked in the operating room at St. Lukes’ Episcopal Hospital.

In 1956, they moved to Montreal, Quebec. Dr. Sinyard founded the Department of Religion at Concordia University and at the time of his death (1969) he was Chairman of the Department.

In 1970, Isabel moved back to Toronto with her children and worked as a Registered Nurse at Trinity College School and at Upper Canada College.

In December 1987, Isabel married the Reverend Canon John Paterson-Smyth (2007). She moved to independent living at Belmont House in 2010 and lived there until the time of her death.

Isabel is survived by two of her three children – David (Irene) from Atlanta, and Margaret (Alan) from Bedford.

Isabel had a strong devotion to the Anglican Church. She also loved to spend time with family at the cottage in Brighton and later with family in PEI.  She also just loved to see pictures and share the accomplishments of her children and grandchildren. She cherished her friendships from both Havergal College and TGH.

She will be sadly missed by all who knew her.

A memorial service will be held at a later date.

Donations in her memory may be made to the charity of your choice.