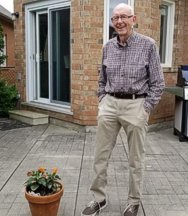 Jim was born on July 16, 1931 in Smethwick, Staffordshire, England to William and Violet Sheldon nee Lewis and was baby brother of 8 children who lived into adulthood.

Married in September 1953 to Ruth Turton, his cherished wife of 67 years, Jim spent his early years serving in ministry across the United Kingdom.

In 1957, Jim and family arrived in Canada where he quickly established himself and built a successful career in insurance at London Life until his retirement.

He then began his work as Pastoral Care minister at Kennedy Road Tabernacle in Brampton, spending his days doing his favourite thing- providing help to those in their hours of need and prayerfully seeing them through life’s many challenges and celebrations.

His love for people was infectious and to know him was to know you were thought of and prayed for. Jim could often be found tending to his garden, whistling to the birds, or enjoying a proper cup of tea. He loved a good book and a fast car. His faith was his anchor. He showed it with service to others, friendship to the lonely, help to those in need, wisdom to the searching… and the occasional bit of cheek. His anthem in the days leading to his passing was “To God be the Glory, for the things He has done”. He will be greatly missed.

A private interment will take place at Meadowvale Cemetery in Brampton Ontario on May 30th. A public celebration of life for friends and family will be held at a later date.

If you wish to share a story or memory with the family, please do so at https://wardfuneralhomes.com/book-of-memories/4226784/Sheldon-James/index.php.

As an expression of sympathy, memorial donations may be made to Covenant House or Kennedy Road Tabernacle. On his behalf, show an act of friendship and kindness to someone who needs it today.