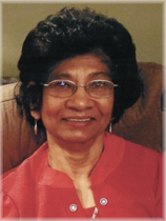 Was born on September 14, 1937 to parents Maud and Benjamin, in St. Andrew, Jamaica. She was the eldest of 9 children, with 4 brothers (Harold (d.), Dolphus, Errol and Raphael) and 4 sisters (Ivy, Madge, Florence and Valerie).

She attended Swallowfield Primary during her formative years, after which she took on the role of caretaker as she helped her parents with her younger siblings. The family resided at 34 Whitehall Avenue for many years. Anita remained at the address until her eldest son, Oral (m. Rosalyn) was born in 1956.

Later that year, she and Supersaad Mehais moved to Spanish Town Road and became budding entrepreneurs as they opened up a grocery store. While living there, they welcomed their first daughter, Judith (m. Hasting) in 1957, and a second daughter, Claudette (d.) (m. Roy) in 1958. On December 27, 1958 they married and had 3 more children. Everald (m. Jennifer), Sandra (m. Clement) and Sharon (m. Barrington) were born in the years following.

In 1963, the growing family relocated to St Johns Road, and in 1964, Anita gave birth to their youngest son, Devon (m. Pamela). Featherbed Lane, Spanish Town became the new family address in 1969. Anita supported her husband as he embarked on a new and successful venture in the trucking business and watched as her children grew into adults. Many memories were made here, as it became a hub for visiting nieces and nephews who affectionately called her “Aunty Deggae”.

Anita was a skilled seamstress, baker and cook, often sharing her knowledge and tasty recipes with the younger generation. Her rum cakes were divine and nobody else’s masala could compare. She will always be lovingly remembered for these. In 1984, Anita and Mehais migrated to Canada to seek a better life for their children. In subsequent years, they were joined by the rest of the family.

Anita is survived by husband of 62 years, Mehais, 6 of her 7 children, 18 of her 19 grandchildren and 23 great-grandchildren. Rest In Peace, Mama.

In light of the recent COVID-19 social distancing regulations, this service will be private and restricted to a limited number of family members. We apologize for any inconvenience but ask that you keep Anita and her family in your thoughts.