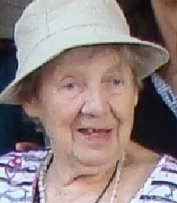 Her husband, Stasys, predeceased her and she is the last of the Höeffners (brothers and sisters) to have passed away.

She leaves behind daughters Nijole, Scarlett, Ruby, and son Stanley, along with their partners, eight grandchildren, three great-grandchildren, nieces and nephews and their families.

Thank you in advance nieces and nephews and their families.

Herta was a giant, despite her short stature! She took care of her dying mother when only a teenager, and then went through World War II also a teenager. She married her husband, Stasys, had two children while still in Germany, and then immigrated to Canada. She and the two children came over by themselves on a ship, not knowing a word of English. She and Stasys eventually made their home in Toronto.

Herta had a love of animals, which she passed on to her children, and they to their children. Some of her great triumphs were learning to drive (although she scared most of her children with this accomplishment!), working at Eaton's and then later Canada Post. She loved to travel, had a love of gardening and animals (especially cats!), and was incredibly proud of her family.

It is with infinite sadness that we say goodbye to Herta, our mother. Our greatest sadness was being unable to physically be with her in her last moments, but we know she was aware of how much we all loved her.

Thank you to all the nurses and doctors at Humber River Regional Hospital, and to all her care workers at Queen’s Estate Retirement Residence.

Memorial Donations can be made to the Ontario SPCA Humane Society.