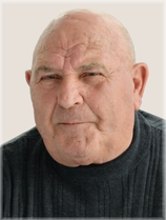 He is now reunited in Heaven with his infant son Gioacchino, his parents Vincenzo and Filomena, his brother Archangelo, his in-laws Giuseppe and Grazia Bancheri, his brother-in-law Calogero, and family and friends that have gone before him.

He was the foundation of his family and will be forever missed by his beloved wife Angela of 59 years, his loving children Enzo (Lisa), Joe (Sandra), Mary (Damian), and Gianni (Silene).

He will forever be held dear in the hearts of his brothers/sisters-in-law here in Canada, his many nieces and nephews and his brothers and sisters and extended family in Italy.

He will be remembered by many relatives and friends who loved him dearly.

During these unprecedented times, it is with heavy hearts that we share that we are unable to have family and friends join us in celebrating Salvatore’s life. A public celebration of Salvatore’s life will be held at a later date. In the meantime, we continue to ask for your prayers, as Salvatore prepares to enter the Kingdom of God.

A special thank you to the Critical Care Team at William Osler (Etobicoke) who worked around the clock to provide Salvatore with the best care and comfort during these difficult times.

In lieu of flowers, please consider a donation to the Ontario Lung Association or William Osler Health System.