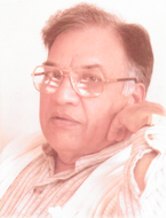 BALI, Rajinder Kumar - Beloved son, husband, brother, father, father-in-law, grandfather, cousin, friend — lived 83 years of service to those around him and passed away peacefully in his sleep on the morning of May 29, 2020 in Markham, Ontario.

Rajinder was born on May 14, 1937 in Amritsar, Punjab. He was the third son of parents late Fakir Chand Bali and late Damyanti Bali.

He grew up in Amritsar alongside his siblings Shrikant Bali, late Kanta Bali, Vishwanath Bali, Ramesh Kumar Bali, and late Ravikant Bali who all knew him as a loyal brother.

Rajinder was always ready to help and make sacrifices to aid his parents, siblings, and others around him. He was also a strong proponent of education and helped several people enroll in and complete their studies. In February 2020 he helped arrange Purnahuti Yagya to honour the ancestors of the Bali family in Amritsar where his offerings fed over 2 000 people.

After completing his studies in Amritsar, Rajinder went on to work with the Department of Atomic Energy and completed post-graduate business studies in Rajasthan. Rajinder had a long and successful career in administration with Atomic Energy, moving across India for his work.

On July 26, 1963 Rajinder married his beloved wife and life partner—the late Aruna Bali (née Lowe). Rajinder and Aruna celebrated 50 years of marriage in 2013, and her passing in January 2014 left a profound impact on him and the whole family; she was simply irreplaceable to all. The couple’s pride was always their three daughters: Rashmi Sharma (née Bali), Reema Bali, and Meeru Bali. His daughters were his life and pride. He supported them in all they did and his love for them knew no bounds. In his later years, his daughters served as his caregivers to support his needs, something he was immensely grateful for. The love between Rajinder, Aruna, Meeru, Reema, and Rashmi was truly of the highest order.

In 1989, Rajinder and his family left India and planted new roots in Canada. The family initially lived in Scarborough where Rajinder worked as a telemarketer with Bell Canada. Soon after arriving in Canada Rajinder met his future son-in-law and trusted advisor: Davendra Dutt Sharma. Rashmi and Davendra gave Rajinder two grandchildren that meant the world to him and that he was very proud of: Kanika Sharma and Kartik Sharma. He was especially proud of Kanika’s success in becoming a lawyer—something he had spoken about for years, and he was Kartik’s biggest supporter in his sports and travels.

Rajinder Bali was someone who always lifted up those around him and did so with a gentle touch. He was a compassionate man and stayed true to his values. He was a very spiritually religious man who believed in and practiced selfless ‘karma’ all his life. Rajinder accepted all people with an open heart and open arms. He loved to share his stories and laugh with everyone, and he was always ready to chat and debate. He was also a modest person; he enjoyed taking walks in the mall and taking people out to eat. He also really liked French fries.

Above all, Rajinder was family oriented. Family meant everything to him and through challenges and good times he was proud of his family and loved them dearly. His family and friends now pay their respects to him. Rajinder touched many lives in profound ways and for that we are eternally grateful to have known him and to have called him Dad, Nana, Bhaiya, or Raj.

Rajinder Kumar Bali will be dearly missed and forever loved.