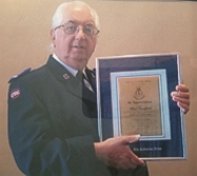 CRANFIELD, Clive John - Sr. Constable Clive Cranfield was Promoted to Glory on May 31, 2020 at the Brampton Civic Hospital at the age of 76.

He was predeceased by his parents, Henry and Emily Cranfield, of Folkston, England.

He also leaves to mourn grandchildren Barry (Jesse), Melissa, Daniel (Alieyah), Kurtis, Scarlett. As well as his great grandchildren Layla, Zoey, Gwendolen, Amelia. Along with many brothers in-law, sisters in-law, nieces, nephews, and all the lives he touched over the years.

Clive spent 30 years as a police officer with the Ontario Provincial Police (OPP). He retired from the force in 1999 as a Senior Constable. During his time on the police force he received many recognitions for his work; among those, the Commissioner Citation Award for his outstanding work.

Clive also was a lifelong member of The Salvation Army, where he held the commission of Corps Sergeant Major (CSM) of the Brampton Citadel, and Divisional Scouter. Clive was very active and took pride in his faith and would share it with anyone who wanted to discuss matters of faith. He truly lived a life for Christ and was a true example of a disciple of the cross.

There will be a celebration of life at a later date once we are able to gather.

In lieu of flowers, the family is asking for donations to be made to The Salvation Army Brampton Citadel.