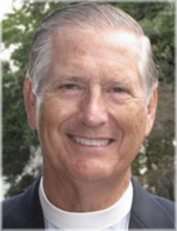 Born in Scarsdale, NY, Peter was an innovative leader, mentor, preacher and author for more than 50 years.

He currently served as the director of the Anglican Leadership Institute since 2016, training leaders in the world-wide Anglican Church in servant leadership, all the while serving as a scholar in residence at St. Michael's Church, in Charleston, SC.

Peter served as director of the Council for Religion in Independent Schools in New York City and, at that time, started FOCUS (Fellowship of Christians in Universities and Schools) in 1962.

He then served as the fourth dean/president of Trinity School for Ministry and as its first president of the board of trustees, before moving to Charleston, SC. Decade after decade, Peter was an unswerving, tireless agent of the Gospel of Jesus Christ.

He was a man who served under the Bible and not above it, fighting to keep the church he knew and loved in a place of obedience to Scripture.

Peter also had an unrelenting passion to reach the next generation for Jesus Christ, as evidenced by the men and women who came to know Christ through Peter's work from pulpit to public debate, classroom to tennis court, ski retreats to one-on-one lunches, truly anywhere he went.

He leaves a global legacy that is sorely missed. It was not by coincidence that Peter died on the eve of Pentecost: Peter lived and breathed through the power of the Holy Spirit.

Peter was also a gifted academic and the author of several books, including: A Church to Believe In; Disarming the Secular Gods; One Lord One Faith: Getting Back to the Basics of your Faith in an Age of Confusion; Can a Bishop be Wrong? Ten Scholars Challenge John Shelby Spong; and From Dry Bones: Reflections on an Unpredictable Life.

The memorial service arrangements will be announced at a later date.