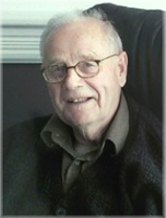 WILKINS, George Frederick - November 7, 1923 - June 1, 2020 - It is with great sadness that we share the news that Dad passed away peacefully at the Sunnybrook Veterans Centre on Monday June 1, 2020.

Pre-deceased by his three brothers, James, Charles and Arthur Wilkins.

Dad was born and raised in Toronto and joined the RCAF after graduating from Weston Collegiate. He flew 35 missions as navigator of a Halifax bomber and was awarded the Distinguished Flying Cross upon returning from overseas.

Dad married the love of his life Isabelle, on July 2nd, 1946 and secured a job at Toronto Brick Company. He spent the next forty one years with that company, finally retiring in 1987 as Vice President.

Spending time at the family cottage on Four Mile Lake was his favourite pastime and although fishing wasn’t his favourite thing to do, it didn’t stop him from taking Isabelle out, even if she was just using him as ballast on those windy days.

Dad lived a full life and at 92 was the oldest student at Young Drivers of Canada. He volunteered at the Maple Health Centre and was a regular at his TaiChi classes.

The family is very grateful for the care Dad received on the LSSE2 unit at the Veteran’s Centre and would especially like to thank Noreen or as Dad called her Red Shoes and the nursing team who supported Dad with compassion this past year. Special thanks to Dr. Selby, Dr. Chang, Dr. Moxley, Jennifer and Katherine .

Our family would also like to thank the support teams from Eldercare Home Health and Castle Keep in Lindsay for enhancing Dad’s final years with their companionship.

Donations, if desired, can be made to the Sunnybrook Veterans Centre.

A small family service has been held in accordance with the Covid 19 precautions. A party will be held in Dad’s memory after things get back to some sort of normalcy.