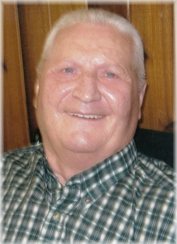 He leaves behind his loving wife Marta (Kelenc) of 61 years.

Anton is survived by his sister Lojska (Stane) and brother Martin (Ivanka) in Slovenija.

Anton was predeceased by his parents Anton and Marija Golobic in Slovenija.

Anton was born in Slovenija (former Yugoslavija). His met his wife, Marta, in Paris, France where they got married and had their first born daughter, Marija. They immigrated to Canada in 1960 and settled in Toronto where their second daughter, Ana, was born.

In 1969 they bought a farm in Proton Station and remained farming until Anton's stroke in 2003. The remainder of Anton's life was spent at LaPointe-Fisher Nursing Home in Guelph, with Marta living nearby.

We would like to thank the staff at LaPointe-Fisher Nursing Home for their loving care of Anton. Anton will forever be remembered for his sense of humour and for his love of hunting, fishing and his wife's awesome cooking. Anton loved to sing and later in life when words failed him, his musical memories allowed him to continue to sing his favourite songs with Marta.

Due to the COVID-19 situation, a private family visitation will be held Tuesday, July 7, 2020, with a private Funeral Mass to follow at Holy Rosary Catholic Church in Guelph.

In lieu of flowers, the family would appreciate donations to the Heart & Stroke Foundation or Guelph General Hospital.