Obituaries  ...for TORONTO and the GTA 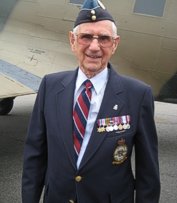 Grace (nee Wauchope) his wife and partner since they were married in 1947, passed away last September and he missed her greatly.

Also mourning his passing are his brother Phil Thompson (wife Barbara) and many nieces and nephews. Dad was predeceased by his sister Mary Kidd in 2019.

Dad lived a full life. He was a decorated Typhoon pilot with 245 Squadron in WW2, having flown over 100 missions and recently received the French Legion of Honour Medal for his participation in the D Day liberation of Europe. He was also awarded the Canadian Confederation Medal for his dedication to community work. Veterans Park in Woodbridge is one of his proudest legacies.

He was a steadfast supporter of the Canadian Legion Branch 414 and gave many years of service to Christ Church Anglican.

His working career included 10 years on the Avro Arrow team at AVRO followed by 28 years of service in Senior Management with the Provincial Assessment Department.

Due to Covid 19 restrictions, a private family funeral will be held at this time. His family hopes to have a Celebration of Life at a later date when we can all come together to honour his memory. Cremation has occurred, handled by Ward Funeral Home, in Woodbridge.

Should you wish, please donate to Christ Church Anglican in Woodbridge in Dad’s memory.

It is with love and pride that we say goodbye to our father. We wish him peace and contentment on this next journey. Go low and slow and throttle back on the corners, Dad.

Fugo Non Fugio
I put to flight. I do not flee.
245 Squadron Motto