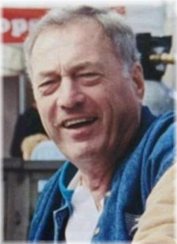 It is with heavy hearts that we announce the peaceful passing of our beloved Gene Gilbert.

Son of the late Frank and Florence Gilbert.

His most cherished role was that of "Grampy" to his grandchildren; Megan, Tara, Natalie, Nicholas, Spencer, Carson, Chris and Cathy. Great-grandchildren Sophie and June.

Frank will also be greatly missed by his siblings; Francis, Margaret and Kathleen predeceased by Wesley and Marilyn.

Gene was more than the family patriarch, he was born in Cole's Island, New Brunswick, and while he moved to Ontario in the late '60s, he brought with him the infamous Maritime friendliness along with him.

He was the sort of person who made an impact on the lives of all he met. He spent his life putting the needs of others first.

Having survived the Great Depression, one of his missions in life was to make sure everyone was well fed. He also worked well into his late 80's, showing by example what it means to put in an 'honest day's work.'

Another lesson we take away from him is that you should never be afraid to dream and take a chance - you might just beat the odds.

Our family would like to extend the sincerest thank-you to the wonderful staff at Greater Niagara General Hospital - the exemplary care he received and the kindness with which you treated our father and the family while we grieved will not soon be forgotten.

Due to the current provincial limitations, a small graveside service will be held for immediate family.

In lieu of flowers, if desired, Gene's wishes are that monetary donations should be made to the Hospital for Sick Children in Toronto or to give to any charity that asks - as he did.