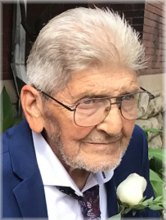 Born to parents, William Henry Reynolds, and Mary Ada (Forbert) Reynolds on Reynolds Road, Madoc, Ontario on December 29, 1937. He moved to Belleville where he met his wife May (Bruce) Reynolds. They moved to Toronto in 1964, where they raised their four children on O’Hara Ave in Parkdale.

Bill was a proud Poppa to Christopher, Joshua, and Zachary Reynolds, Tannor and Turner Crockett, and Tristin Ponciano.

Great grandfather to Jordan, father in law to Darren, Angela, Louise, Tracy, and grandpa to Amanda, and Claudia.

Bill and May owned and operated Supreme Roofing for forty years where Mike became his right hand man. Bill has a great belief in volunteering his time to kids in the community, namely McCormick arena, since 1970, where he was a coach, fundraiser, board member and was rewarded for his effort and involvement with a Christmas Tournament for the younger hockey players. For this Bill received an award pin from Toronto City Hall.

In lieu of flowers and persons wishing to make donations May and the family have chosen to direct them toward the redevelopment for 6G at St. Joseph’s, to update the facility for the geriatric patients under the guidance of one amazing physician Dr. E Gutman.

Bill will be laid to rest at O’Hara Place Cemetery in Madoc, Ontario.