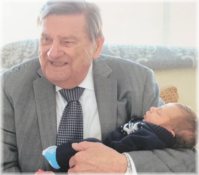 Steve was born in Lvov, Poland and immigrated to Winnipeg, Manitoba when he was 2 years old.

He came of age during the difficult years of the Great Depression and World War II and these experiences shaped him in enduring ways.

His modesty, lack of pretension and distaste of waste and excess were ingrained in his character.

He met his devoted wife of 66 years, Ruth (nee Buffie) in Winnipeg and married her in Toronto where they settled to raise a family.

Steve was a wonderful father to his two children Bill (Gemma) and Barbara (Greg) and took great pleasure in his two grandchildren Matthew (Leah) and Brittany (Adam) as well as his two great-grandchildren Oliver and Madelyn. Steve revelled in watching Matthew play football on a summer afternoon and accompanying Brittany on a winter skate.

Steve was the first in his family to go to University. In 1949, he graduated with an Engineering Degree from the University of Manitoba. He joined Stark Electronics for a number of years before making a career change to the finance world becoming a loans officer, first with Federal Business Development Bank and then with Fuji Bank where he became one of the first Canadian English-speaking Vice Presidents.

He leaves behind a number of sisters-in-law, nieces and nephews from the Buffie clan who all loved and appreciated his gentle soul. Steve is resting at York Funeral Centre where there will be a private family service on Saturday, July 18, 2020.

In lieu of flowers, donations to North York General Hospital would be appreciated.