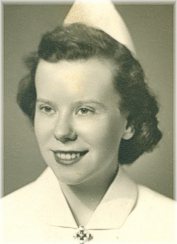 McCULLOGH, Shirley Mae MAE (nee SCURR)    -While there are many lives that are deserving of praise and honour, the life led by Shirley Mae (née Scurr) McCullogh was nothing short of extraordinary.

Shirley was born on March 24, 1930 in Moncton, NB and passed away peacefully in Toronto on July 7, 2020, under the loving care of her sons, Richard and Peter (Isabel).

Juggling her own career while supporting Bill's vocational aspirations with Bell Canada, Shirley always found a way to ensure that her two sons were loved and cared for. In their final move to Scarborough, Shirley transferred to Scarborough General Hospital where she worked in the emergency department before retiring in 1991.

This was one of Shirley's greatest and most admirable gifts – she truly cared about the people she met and was always able to find ways to understand, support and forgive.

Suffice it to say, Shirley McCullogh was an extraordinary woman whose memory will live on among those who were lucky enough to have crossed her path.

She is truly an inspiration whose life and legacy reminds us all that throughout any storm there is always a light that can be seen.

There will be a private service with family and close friends.