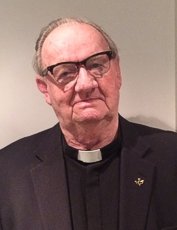 GARVEY, Father Thomas, CSSp - (1930 ~ 2020) - FATHER THOMAS GARVEY of the Spiritan Province of TransCanada died peacefully on the night of July 29, 2020 at the Houses of Providence in Scarborough, Ontario.

Father Tom was predeceased by his parents (Daniel and Nelly) and ten siblings (nine brothers and one sister). He is survived by numerous nieces and nephews in Ireland.

Father Tom was born April 25, 1930 in Abbeyknockmoy, Tuam, Co.Galway, Ireland. He made his first profession as a Spiritan on September 8, 1949 and was ordained to the priesthood on July 13, 1958. During his 72 years plus as a priest, Father Tom served in both educational and pastoral ministry. First assigned to Canada in 1959, Father Tom taught at Neil McNeil High School where he served in various positions for 11 years. In 1979, he moved to Bishop MacDonnell High School in Guelph, Ontario where he served for five years before moving to Alberta.

It was in 1975 that Father Tom moved to Alberta and began a long and memorable career in pastoral ministry. Father Tom served in several Alberta parishes including Blairmore, Vauxhall and his much beloved Banff, where he ministered faithfully for 16 years.

Retiring to Calgary, Father Tom continued to assist where and when he was needed, helping out with both weekday and weekend Masses and acting as chaplain to various congregations of Religious sisters.

In 2013, Father Tom moved to the Spiritan retirement community of Laval House in North York, Ontario. Since April of 2019, Father Tom resided at the Houses of Providence nursing home in Scarborough, Ontario. He will best be remembered for devotion to the sacraments, especially the sacrament of reconciliation, his tremendous pride in being a Spiritan priest and his sense of humour.

His Spiritan confreres, family and many friends will miss him. May he be at peace with the Lord.

*Please note that due to COVID 19, certain restrictions and protocols must be adhered to. Masks must be worn in the church and social distancing regulations must be followed according to the rules of the government of Ontario and the Archdiocese of Toronto.