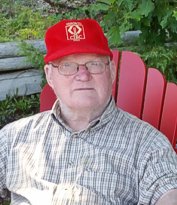 MANSON, Douglas Paul 'Doug' - It is with great sadness that we announce the passing of Douglas Paul Manson at the Bradford Valley Care Community on August 2, 2020 at the age of 86.

Doug was predeceased by his wife of 42 years Margaret (nee Farmer), and was a loving father to Douglas Jr. (Mary), Bruce (Connie) and Glenn (Jackie).

He was a longtime member of the King City Lions Club and a career employee of Bell Canada. Doug loved spending time at the family cottage, which he built himself including clearing the treed property. He will be missed dearly by family and friends, particularly by his life-long best friend Doug Forth.

The family would like to thank the staff at Bradford Valley for the care and kindness they provided to Doug over the last few years.

A memorial service to celebrate Doug’s life may be held at a future date. Arrangements with Roadhouse and Rose funeral home, Newmarket.

In lieu of flowers, donations to the Alzheimer Society of Canada would be appreciated.