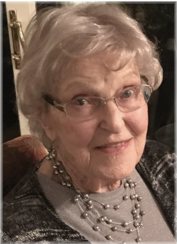 MacKINNON, Mary Elizabeth (nee DAKIN)   - 1922 - 2020  We are deeply saddened that our beloved Mother, Grammy and Aunt has passed away on July 31st, in Oakville.

Although she was 98, it was unexpected. Mary grew up in Montreal, graduating from McGill University in Phys-Ed ('43).

She taught at Acadia University and then worked for the YWCA in Sydney, NS, during WWII, before marrying Roland W. MacKinnon in 1948.

She raised her three sons, in Vermont, Ohio and Toronto, spending joyous summers with extended family at her parents' home in the Laurentians.

She moved to Oakville in 1974, graduating from Sheridan College's Library Technician program.

She spent many years volunteering, especially after retirement, organizing fundraisers and events for a senior centre in Oakville and driving/delivering for Meals on Wheels, until diminished eyesight forced her to slow down at the age of 90.

She was able to live independently right up until her passing. Mary was a kind, generous person, who loved travel, exploring Ontario and sharing meals with friends and family.

She was always there for us, and will remain in our hearts always. Our gratitude goes out to many people: friends and caregivers who supported Mary during the past few years; with particular thanks to Dr. Jane Charters and Ms. Honor Sebok.

Although we are grief-stricken, we know we were lucky to have her with us for as long as we did.

Mary was predeceased by her cherished son, David, and survived by sons James (Susan), and Ken, and grandchildren Janet (Rae), Allison (Matthew), Melissa and Scott.

There will be a celebration of life at a later date when it is safe to gather.