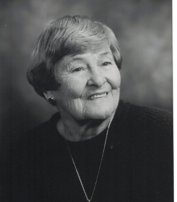 Bernice passed away at Kipling Acres, Etobicoke, her daughter Pam having been able to spend the last week at her bedside.

Bernice was a loving mother to Pamela Cooke and her husband Brian Wildcat of Maskwacis, Alberta. She was devoted to her grandchildren, Dr. Matthew Wildcat (Renee Beausoleil), Nigel Wildcat (Tessa Busenius), and Devon Wildcat (Miguel Castillon), all of Alberta.

She was predeceased by parents Ebenezer and Edith (nee Harris) Caldwell, sisters Norma (John) Gunesch, and Helen (Bruce) Nicol. She was married to the late Hugh F. Cooke.

Bernice lived both an ordinary life and an extraordinary one. She grew up with two sisters and a two parent household. She was educated, becoming a registered nurse when she graduated from Hamilton General Hospital in 1940, and then later in life, a social worker with Metropolitan Toronto, Homes for the Aged Division, making placements for the elderly. She was a veteran of WW2 serving proudly as a nursing sister with the RCAF from 1943-1945 in Ontario and Alberta.

She got married and had one child and became a grandmother of three. Then, the extraordinary elements began to appear. She worked continually for 40 years, in an era when many women did not work outside of the home. Her life spanned 2 world wars, the great depression, the Spanish flu and the COVID pandemic.

She was dealt a good hand in her longevity. She drove until she was 98 years old and lived in her home of 57 years until she was 99 years old. She was retired for almost as many years as she worked. Retirement at the age of 65, was a golden age for her, as she had found a passion, the game of bridge, which she believed was a cure for anything that ailed you. Bridge added much to Bernice’s life, friends, purpose and routine, activity, kept her mind sharp and of course provided the joy of winning.

She played her cards right. All of her family have graduated from university, influenced by her belief in education. She bridged and connected with many groups: family, friends, neighbours, former colleagues and bridge partners. Fifty people attended her 80th birthday. She was a caregiver to four family members. Kipling Acres Long term care, a facility she helped to open and worked out of became her final home at the age of 99.

And finally Bernice became a proud centenarian, trumping the rest of her family by winning the title of longest living member, in a family already known for their longevity. And then, her final show of strength, surviving COVID at the age of 101 years.

Bernice was a “Silver Life Master” but also a “Master of Life” living a life that was in harmony with her values of helping others, and caring for her family. She made a difference in our lives and will be missed by many.

Arrangements (WITH RESTRICTIONS) with Ward Funeral Home 'Weston Chapel.' Cremation has taken place and interment will follow at a future date in St. Philip’s Cemetery. Preparations for a service are still being worked on.

Enjoy a glass of Rose or a Werthers in memory of Bernice.