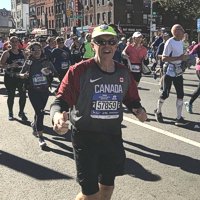 Terry passed away peacefully with his family by his side at the age of 67.

He leaves behind his loving wife of 44 years, Marion, his children Cheryl, Kevin (Caroline), and Ryan (Lisa), his grandchildren, Emily, Kayla and Fraser, his siblings Darlene (Bob), Paul (Rosana), sibling-in law Judy, and many nieces, nephews, cousins and friends who were all “his favourites."

Terry was predeceased by his beloved parents, Frank and Mary Whittam, and his brother and role model, Bob Whittam.

Terry truly lived his life to the fullest and was guided by the principles of love, kindness, faith, integrity and loyalty.

Terry was born in Toronto and a graduate of De La Salle College and the University of Toronto. He had a successful 35-year career with both Shell Canada and IBM Canada, leading, coaching and mentoring thousands of individuals during his time with both of these organizations.

Terry deeply loved his family, friends, community, and nature. Terry’s love for family and nature was cultivated early on in his life with time spent at his family’s cottage on Clearwater Lake, where the sunsets are always golden! Terry’s parents were one of the founding families on Clearwater Lake and built the cottage there in the 1950s. Terry spent a significant part of his childhood there with his beloved family, cousins and friends learning about the natural world and life in general.

Terry was an accomplished public speaker, educator and citizen scientist who inspired many others with his conservation work with respect to Monarch butterflies, beekeeping, bird watching, and Clearwater Lake. Terry was actively involved in protecting pollinator health and received his Master Beekeeper designation from the University of Montana in 2016. He was also an executive member of the Urban Toronto Beekeepers Association and presented at the Global Apimondia Congress in Montreal in September 2019. Terry was also actively involved with the University of Kansas’ Monarch Watch program and tagged thousands of Monarchs during their migration to assist with the research and conservation of this species. In 2018, Terry also had the opportunity to travel to the Monarch Butterfly UNESCO Biosphere Reserve in Mexico to witness first-hand the results of this work.

Terry was also passionately involved in the Clearwater Lake Property Owners Association (CLPOA). Terry was President of the CLPOA for many years, an environmental champion for the lake as the Lake Steward, responsible for the maintenance of the roads into Clearwater, actively engaged with the Ministry of Natural Resources and Forestry on strengthening the lake trout population, shared his love of citizen science at Annual General Meetings, administered the Clearwater Lake Facebook page and was a caring neighbour and friend to anyone who needed assistance day or night. Although Terry is no longer with us on this earth his joy, love and passion for Clearwater’s unique natural environment will be an inspiration for all who knew him and for generations to come.

In addition, Terry was also a dedicated long-distance runner, who ran the NYC Marathon in 2018, the Rochester marathon in 1984, the Canadian Army Commanders Challenge 26km (2018, 2019), numerous half marathons around North America including, Portland, NYC United Airlines, Mississauga, Toronto Scotiabank Waterfront, and most recently the Disney World half marathon (January 2020) and Brooklyn virtual half marathon (May 2020) with his daughter, training and running buddy, Cheryl.

In lieu, of flowers and in line with Terry’s passion for health and wellness, donations can be made to the Heart and Stroke Foundation in his memory.

Arrangements with Paul O'Connor funeral home, Scarborough. In light of COVID, the funeral service will be limited to Terry’s immediate family with a celebration of life to follow once the COVID restrictions are lifted.