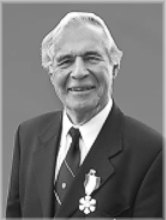 DORTON, Roger Anthony, CM, PhD, P Eng - It is with great sadness that we announce the death of our father on October 16, 2020.

He was predeceased by his wife, Patricia (our mother), and his brother Michael.

He is survived by all four of his children, Peter (Caroline Cosco), Iris, Anne, and Catherine (Roberto Centazzo); his grandchildren Patrick, Liam, Andrea, Michael, Erica, and Spencer; his brother Jervis, and family friend Wolf Kohler.

In 1940, along with his mother and two brothers, he was evacuated to Lexington, Massachusetts, where he was first introduced to two of his guiding passions: engineering and Boston sports teams.

After returning to England in 1944, he studied at the University of Nottingham, where he mixed hard work with pleasure; in other words, as an old friend quipped, “he divided his close attention between the behaviour of suspension bridges and the behaviour of cricket balls!” He received his PhD in 1954.

That same year, he sailed back to North America to take a position with the Ontario Department of Highways in Toronto, the first stop in an itinerary of around-the-world adventures. Aboard the ship, he met a lively Roman Catholic nurse named Patricia, and he exchanged one form of adventure for another.

In 1956, Roger followed Pat to Montreal, where she had found a job in nursing at Victoria Hospital and where they both hoped she would get the best treatment for her mental illness. Again following in her footsteps, Roger was baptized into the Catholic Church. Despite some heartbreaking setbacks, they were finally married in fall 1958. Roger and Pat took advantage of all the cultural offerings that most lively of Canadian cities had to offer, especially enjoying their love of classical music.

Professional uncertainty arising from the political unrest in Quebec led to the difficult decision to move the family to Toronto in 1973, when Roger joined the research division of the Ontario Ministry of Transportation.

Roger was beloved by so many and surrounded himself with an eclectic group of colleagues and friends of all ages. Of special mention are Richard Scott and Nancy Zurita, and also, during his final year, Sheila Kirby.

He was admired for his integrity, hard work, and dedication, not only to his career but also to his family. He lovingly cared for his wife, Patricia, throughout her lifelong struggle with mental illness. He remained eternally hopeful. He will be terribly missed.

We could not have asked for a greater dad.

In honour of his association with the University of Waterloo and to acknowledge the early influence of architect Marjorie Pierce during Roger’s wartime years, the family would like to set up a small scholarship for a female engineering student.